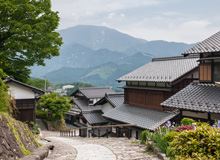 Among the most famous of the Seiwa Genji was General Yoshimitsu Shinra Saburo Minamoto. He was a master of many arts: warrior, poet, physician and historian. He greatly advanced the arts of atemi (striking vital points) and kansetsu (joint locks) by dissecting and analyzing the bodies of criminals and war dead. He lived in the Daito mansion, which many believe to be how the Minamoto style of Aikijutsu came to be called Daito-ryu. General Yoshimitsu passed on the techniques to his son Yoshimitsu Yoshikiyu, who resided in Takeda in the province of Kai. Near the end of the 16th century, the Takeda Han fought the formation of the Tokugawa Shogunate, which was destined to rule Japan until the Meiji Restoration in 1868. When the position of the Kai Takeda became untenable, the family moved north to take up service in the Aizu Han where they became known as the Aizu Takeda. There they held the position of shinamban (clan fencing masters) and taught, their art to the clan's most senior members.

The last of the Aizu shinamban, Takeda Takumi no Kami Minamoto Soemon (1758-1853), had two important students. One was Takeda Soyoshi, his grandson. The other, Saigo Tanamo (1829-1905) was minister of the Aizu Han and head or Shirakawa Castle. In 1868, when the Meiji Restoration returned power to the emperor, Soyoshi was killed as a leader of the resistance to this change. Saigo became a Shinto priest at the Nikko Toshugu shrine, changing his name to Hoshino Genshin. His senior student was Takeda Sokichi, Soyoshi's eldest son. When Sokichi died in 1875, Saigo called his younger brother to the shrine to continue the Minamoto tradition.

Enter Takeda Sokaku Minamoto Masayoshi (1858-1943), the last or the great swords-men. Here was a man who lived, breathed, ate, slept and dreamt the martial arts. His fanatical devotion is perhaps explained as a compensation for the fact that, at less than five feet tall, he was much smaller than his elder brother. Born and raised as a samurai, Sokaku began his study of Daito-ryu aikijutsu and Ono-ha itto-ryu kenjutsu (swordsmanship) at the age or five. His tremendous natural abilities and small size soon earned him the name Kotengu (little demon).

By the age of 20, he had earned licenses from four of the most highly respected sword and spear schools in Japan. For the next 20 years, he traveled throughout Japan issuing challenges, and was rarely defeated. He is said to be one or the few people ever to master all 18 or the traditional martial arts. Sokaku was not yet ready for temple life, however, and left after only six months.

Saigo then selected Shida Shiro (1868-1920). While in Tokyo in 1881, Shiro met Jigoro Kano, who was in the process of creating a new organization called Kadoka Judo. Shiro joined him and quickly became the most senior member. He was appointed director of the Kadoka in 1888, but soon was overcome with the conflict of loyalties between Judo and Daito-ryu. In 1891, he deserted both systems and Saigo Tanamo once again called on Takeda Sokaku, hoping he would now be ready. Finally, in 1898, Tanamo managed to convince Sokaku to assume the leadership of the Daito-ryu.

Sokaku's years of intensive training had established a life pattern, however, that could not be broken. He traveled Japan teaching, never stopping long enough to establish his own dojo. His students were among northern Japan's elite: generals, admirals, judges and mayors. By 1915, he was the most famous instructor north of Tokyo. Daito-ryu Aikijutsu survives to this day, under the leadership of Sokaku's son, Takeda Tokimune. Also among Sokaku's chief instructors was Toshimi Hosaku Matsuda, who taught one of his more gifted students extensively in the techniques of the ryu. This student would later study directly under the guidance of Sokaku Takeda himself. 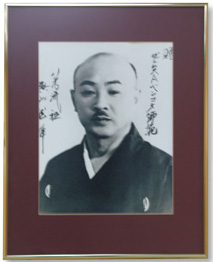 OUT OF THE MIST 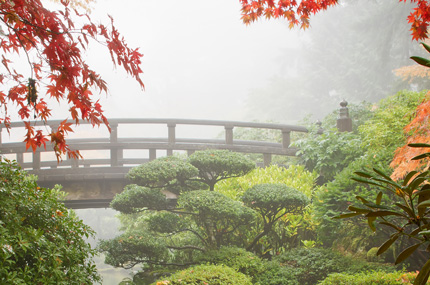 Okuyama Yoshiharu (Yoshiji) was born on February 21, 1901, in Yachi-cho, Nishi Mu- rayama, Yamagata Prefecture, to a former samurai family of the upper Mogami River area. Not a great deal is known about his early years except that he was active in various bujutsu-ryu (martial arts systems) and studied traditional Oriental medicine.

In 1924, he entered one of the most prestigious government training schools of the day called the Tokyo Seiji Gakko (Tokyo School of Government), where he soon excelled as an orator. By the time he graduated in 1927, he was distinguished as the Prime Minister to the First Oratorical Imperial Youth's Congress.

Upon graduation he struck out to the frontier of Japan, Hokkaido, where he hoped to quickly make his mark. It was here at Asahikawa, through his contacts in government work, that he first became introduced to Shihan Toshimi (Hosaku) Matsuda, who at the time was teaching Daito-ryu Aiki jujutsu at the Shobukan Dojo. Matsuda, a tough Japanese, born in Hokkaido and former apprentice to the founder of Daito-ryu, Shihan Somi (Sokaku) Takeda, soon found that Mr. Okuyama was an excellent student, and taught him extensively the techniques of the ryu. 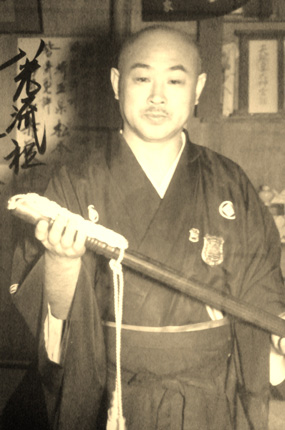 During his travels, Okuyama had the opportunity to stay with various teachers, and picked up a considerable amount of knowledge and perspective in the process. One of his major areas of interest was traditional Oriental medical therapy, and on several occasions he was able to apprentice himself to some highly skilled teachers. The first was Ryozan Hirayama, whom Mr. Okuyama first met in 1930. Mr. Hirayama was a teacher and practitioner of the Japanese In/Yo (Chinese Yin/Yang) theory as applied to keiraku therapy (circulation medicine using the meridians of the body), who taught Mr. Okuyama its principles and application to the diagnosis of disease, both pulse and ninso (face reading), shiatsu (finger pressure medicine), amma (massage) and diet. Mr. Okuyama also studied one of the more esoteric schools of therapy of the time, western medicine, under Haizan Minami, whom he first met in 1934, and with whom he became close friends from that time forward.

Among the martial arts other than Daito-Ryu studied during his pilgrimages, the major ones included Hasegawako-ryu iaijutsu (sword drawing), which he learned from Shihan Kiichi Yamaguchi in the city of Sapporo; shurikenjutsu (various throwing weapons) and jojutsu (stick) from teachers in the mountains of Niigata; kusarigama (sickle-chain) in Ise; Nito-ryu kenjutsu (sword) at Kumamoto hot springs; and sojutsu (spear) and kyujutsu (archery) in his home province of Yamagata.

In 1936, Mr. Okuyama was awarded the instructors license in Daito-ryu and thereafter apprenticed himself to Shihan Somi Takeda, where he studied the Okuden (secret techniques), and assisted Takeda with the day-to-day running of his aiki association. At the time, Takeda was quite old, well over 80 (Mr. Okuyama described him as "completely toothless, but robust for a man his age"), and needed help with a great many things. For a while, Mr. Okuyama was personally responsible for all of Takeda's assets, which could have been rather formidable considering he charged the equivalent of $150 and $250 per technique, depending on the level of training one desired.

At the time, there were three levels of training - shoden (basic), chuden (middle), and okuden (secret)- and four sets of basic techniques numbering 582. The higher the level, the more a student needed to pay.

Given this, one may readily see why the founder of aikido, Morihei Uyeshiba, who trained formally with takeda for a total of 100 days before receiving the instructors license, gave up his entire inheritance. Keep in mind, however, that Takeda's family, former Otome-ryu kenjutsu instructors of the Aizu clan, were put completely out of work after the dismantling of Japan's feudal system during the Meiji restoration of 1868. He, like so many of his contemporaries, sold his martial arts skills to the public in order to make a living, a pattern that continues in certain ryu today. This was less objectionable to some former samurai than taking a pedestrian job. 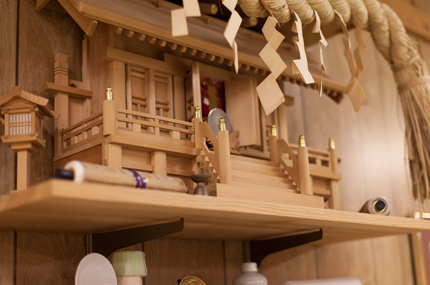 Upon finishing his studies with Takeda in 1938, Mr. Okuyama published the first of what was to be many of his martial arts texts entitled, "Daito-ryu Goshinjutsu" (The Daito System of Self-Protection). Shortly thereafter, backed by the assistance of Army General Iwane Matsui and Naval Attache Kumpei Matsumoto, Mr. Okuyama established the Dai-Nippon Shidokai (Greater Japan Way of the Samurai Association} , and became a public instructor in what he called Daito-ryu Hiden Shido (Secret Daito-Ryu Way of the Samurai}. His first dojo was in Asahikawa and was called the Nippon Shidokai Ryubukan.

In 1939, he moved to the Kanda district in Tokyo and founded the Dai Nihon Shidokai, which began his split from the main Daito-ryu school. By this time, Takeda was too old to take care of himself and the leadership of Daito-ryu was somewhat in question. The heir apparent, Tokimune Takeda, was still quite young, but seemed destined to take over the ryu. Mr. Okuyama, seeing little chance for administrative advancement in Daito-ryu, grew restless. After so many years of study and travel, he had become a highly skilled exponent of both martial arts and medicine, and wanted to use those skills not only to bring financial benefits and fame for himself, but also to be of distinguished service to his country. It was in this environment that he began to formulate his own distinct system.

"THE SPINE OF A DRAGON"

Finally, on June 1, 1941, at the Shiba Tenso Jinja (Shinto shrine in the Shiba district of Tokyo}, he held the Hakko-ryu, Kaiso Hokokusai [Ceremony Proclaiming to the Kami (Shinto deities} the Birth of Hakko-ryu]. From that day forward Mr. Okuyama took the pen name of Ryuho. Meaning "the spine of a dragon" and called his system Hakko-ryu JuJutsu.

During the war he taught Hakko-ryu in its original form to many of the leaders in government and the military, and in 1943 renamed his dojo the Hakko-ryu Kobujuku (Private School of the Ancient Martial Art Hakko-ryu}. He was featured in magazines, gave seminars and appeared on radio talk shows.

By the middle of the decade, however, the war situation began to look increasingly bleak, and with the continuous allied bombings, Tokyo was becoming almost uninhabitable. Finally, in 1945, Mr. Okuyama abandoned the Kanda dojo and escaped to his home prefecture of Yamagata. The trip was very difficult. Mr. Okuyama wrote of having to subsist on a single piece of tofu each day, and sleep in the snow with only an amado (storm door made of light wood) for shelter. One can hardly imagine the difficulties faced by the average Japanese citizen during that period. Once he arrived, he and a small group of followers joined the Mt. Haguro sect of Shugendo where they prayed for peace and the deliverance of their nation.

In 1947, Mr. Okuyama quietly relocated to Saitama Prefecture where he established the Hakko Juku Honbu Dojo (Private Headquarters Dojo of Hakko-ryu} and slowly rebuilt his former life as a martial arts teacher and healer. By this time, his political aspirations had been completely destroyed, and he decided to leave that era of his life behind him. In this post-war environment, however, making a living as a martial artist was no easy task either but gradually, over many years, he succeeded in doing so.