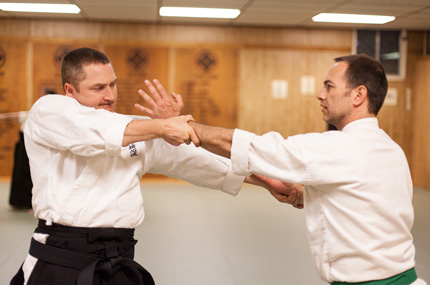 Although Hakko Ryu Jujutsu was founded in 1941, it inherits a century-old legacy of classical bujutsu (warrior arts) used by the samurai of feudal Japan. Hakko Ryu founder Ryuho Okuyama (1901-1987) and his son Nidai Soke Ryuho (Toshio) Okuyama come from a long line of prominent bushi (warriors), the Genji clan. As a student of Hakko Ryu, you can trace the origins of your art as far back as the 8th Century A.D.

Although there are sketchy references to martial art techniques dating as far back as 23 B.C., the first generally acknowledged was the Japanese grappling system that was developed by Prince Teijun Fujiwara, 6th son of Japan's 56th Emperor Seiwa Fujiwara (850-880 AD.). The techniques were inherited by Teijun's son, Tsunemoto, who was given the name Minamoto. His descendants are known as the Seiwa Genji and his aikijutsu techniques were kept as a secret family art. With them, the Minamoto clan rose to become the most powerful warriors in all of Japan in only four generations.